SMD soldering with a pre-heater and self-etched boards

I’m planning to build another radio telescope (I’ll write more about that once it’s a bit more advanved), and for that, I need to solder a lot of SMD stuff — mostly because many of the parts I need are only available in SMD. This has a few advantages — especially it’s cheaper and smaller — but it can also be very difficult to do with a soldering iron, for QFN packages for example. Common methods to solder such things include insane soldering iron skills (which I don’t have), temperature-regulated ovens (which are large and not that cheap), hot-air guns (which are quite expensive), and hot plates (which I tried, but it didn’t turn out to be very convenient — the heating times are long, and the temperature is difficult to control). So recently I found this nice product (called “TENMA – 21-10135 – PRE-HEATER”) and figured that it might be useful for this purpose (and with around 45 euros, it’s quite a bit cheaper than the alternatives). And indeed, it is:

This is not as difficult or dangerous as it might sound. All you need is a laser printer, a hot iron, a bucket, and the (quite cheap) Sodium persulfate acid. You can easily buy the latter online in most electronics online shops.
I will not describe the method here in full, since there’s many nice tutorials out there already. But basically, you just print your board (mirrored!) onto some paper with a laser printer, then transfer the toner to the board by using the hot iron, and then you drop the whole thing into the acid. The areas with the toner are protected, but the rest of the board’s copper layer will be dissolved. Instead of a complete description, I’ll just list things which I found to be important in this process:

If you follow this advice, then etching boards with 0.1mm wide tracks should be no problem using this laser-printer method. The tracks on the board above are 0.2mm wide.
For designing boards, there’s several tools available; I used kicad, but I can’t really compare it to others (since I didn’t use anything else yet). It’s quite full-featured, but its GUI could need improvements in several corners.

For soldering the board, I used the pre-heater mentioned above. It basically just blows hot air out of a hole, and you can put your board on top of that.

The device is meant to be used in combination with a hot-air gun, but it turns out you can also use it stand-alone 🙂
It allows to select temperatures as high as 350°C, which is more than enough to melt solder. In practice, a temperature of little more than 250°C turned out to be best. Ordinary 60-40 solder melts at a lower temperature, but consider that the air blowout temperature is not going to be the same as the temperature on the upper side of the board.
I just put some ordinary solder (with a soldering iron) on the pads, then fixed the parts on them using viscous flux. Using soldering paste would possibly be preferable but I don’t have any handy. After that, putting the board onto the “pre”-heater and “baking” it for about two minutes was enough to get all the components soldered nicely. Here’s another shot of the resulting board: 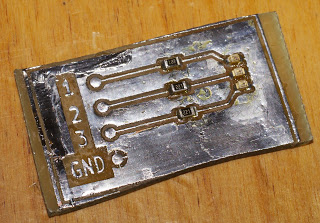 It obviously doesn’t do anything useful, it’s just a test board with three LEDs.

Next, I’ll try whether I can solder the network analyzer I planned with the same technique 🙂