Some time ago, I found an interesting recipe on the internet: the world’s first open source cola beverage. Being an open-source fan and generally interested in crazy experiments, I tried this out. Here’s my results.

For the first try, I used the recipe from wikipedia (http://en.wikipedia.org/wiki/OpenCola_(drink))

First, here’s all the stuff I needed to buy:

Although you can’t buy most of that in the supermarket, it proved to be not that difficult to get all the stuff together (at least not here in germany). However, I had to order in three or four different shops, which sadly lead to quite some shipping costs. For most ingredients, you cannot buy less than 10ml; neroli oil is very expensive (about 3.000 euros a liter!), so you probably have to search quite some time until you find a shop which offers a 1-ml-bottle (I got mine for about 5 euros). I recommend buying 30ml of orange and lime oil, otherwise you’ll only have two or three tries (which you could easily fail if you’ve never done this before). Be sure to buy food-grade gum arabic, and be sure it is a very fine powder. You can buy citric acid (solid is good) at a pharmacy, and caramel colour is available in every supermarket.

For those ingredients, I paid little more than 50 euros overall, including about 15 euros of shipping costs. What I got is sufficient for between two and 40 batches of syrup (one batch of the official recipe is something like 20 liters of cola), and you’ll run out of the cheap stuff (orange oil, lime oil) first.

However, it’s very difficult to measure “0.25ml of neroli oil” without a suitable tool, and it’s important you can do this quite reliably, as a) the stuff is expensive, and b) it’s toxic if you put too much of it into the beverage. Thus, I bought a 1ml pipette (with 0.01ml marks) on ebay (all other shops would only sell 12 of them, for prices like 50 euros; on ebay, I got them for two bucks a piece, which is really nice). This turned out to be a very, very useful investment, I really recommend it.
You’ll also need a  balance which can at least measure 1g exactly; a good idea to test it is stacking 1-euro-coins on it (one of them weights exactly 7.5 grams).

This is all the stuff you’ll need: 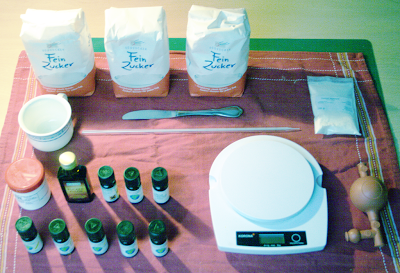 Also, after having tried it once, I recommend putting some paper onto your table which you can dispose of later except you want your whole house to smell like cola for two weeks.

Using the Wikipedia recipe, I did the following:

Okay! You’re done with the difficult part. I suggest you test your result: add a very small amount of the liquid to half a cup of water, mix with a spoon for some minutes, and let it rest for 10 minutes. If there’s no oil drops on the surface, then your concentrate should be o.k.

Now, the syrup. For this first try, I made the full batch of syrup at once; as wikipedia says, this means you dissolve quite a large amount of sugar in water, then add the citric acid and the colorant (for exact amounts, see the Wikipedia page mentioned earlier).
Instead of adding 3.5 Tsp. of citric acid, if you have it in solid form, you can just add about 14g and mix well. However, I’d add more; I used 30g, that’s a bit too much, maybe about 22g would be good. I’d also add more colorant than the 30ml they tell you to, otherwise the beverage just isn’t black enough. I used 40ml; that’s okay, but if I had had more, I’d have used 50 or even 60ml.
Then, just put your whole flavouring formula into the syrup (or, better, put some of the syrup into the flavouring formula, mix, and put it back).

The last part is easy; just mix one part of the syrup with five parts of sparkling water. Use enough syrup; if you mix it with too much water, it’s going to taste very, very strange.

Now, how does it taste? Well… if you ask me, like if you mix those Haribo HappyCola sweeties with fizzy tablets. It’s not especially bad, but it tastes quite artificial and agressive.

Having quite some ingredients left, I decided making another batch of cola using a different recipe: http://sparror.cubecinema.com/cube/cola/new_recipe.html.
What’s different? Well, there’s a shift in the oil mix; they use more orange and lime, and less cassia oil. They also have some good ideas for organizing things, making preparation much easier. I recommend you read the recipe before reading on, I’ll just comment on what they do in the following text, not re-tell it.

So, let’s start. First, mix the oils, the gum arabic, and the water like described above. The Cube Cola guys use a hammer drill to mix, this really isn’t necessary, a spoon, a cup, and a bit of patience (20 – 30 minutes) for mixing is enough.

They then mix this flavouring formula with the citric acid and the colorant; however, I would NOT mix the colorant with this, as you can then use your pipette to easily and exactly measure the resulting concentrate (for the “small” syrup batch, just use about 6.5ml of concentrate instead of the 14ml they tell you if you leave out the colorant here).

To prepare the syrup, make the water warm a bit after adding the sugar, it’ll be very, very difficult to dissolve it all otherwise. For a small batch of syrup, I used:

Mix this syrup with sparkling water, 1:7 this time — done!

Again, how does this taste? Better, definitely; and less smooth (there’s less sugar in it overall). Much less artificial, much less after taste, just… better. In fact, it’s quite enjoyable, and if you’d like to try this yourself, I can recommend this recipe. By mixing the citric acid with the flavouring formula early, it’s also very easy to handle as you can make like 400ml of syrup easily (not 5l like for the other recipe).

If you have questions, feel free to comment or write me an email.